This Coca-Cola cake is a classic dessert for family gatherings and special occasions. It’s a moist chocolate cake made with Coca-Cola as a key ingredient, and it’s topped with a layer of deciduous chocolate frosting.

Detailed measurements and full instructions can be found in the recipe card at the bottom of this post.

This cake brings back fond memories of my trip to South Carolina with my husband. We stopped at a Southern restaurant, Jestine’s, and had a terrific Southern meal with this soda cake for dessert.

This sheet cake is an adaptation of the one I had at the restaurant. I used a chocolate cake mix for the batter with coca-cola added. This results in the perfect spongy texture for this cake.

I also use the soda in the sweet chocolate frosting that gets spread on the top.

Be sure to try out Bacardi Rum Cake or Buttermilk Pound Cake.

How to make Coca-Cola Cake

This cake has two steps: Making the cake and making the frosting.

Ingredients for the Cake and Frosting

How to make the cake

Preheat your oven to 350 degrees Fahrenheit and prepare a 13×9 inch baking dish by greasing it. Set the dish aside.

In a large mixing bowl, combine the cake mix, two eggs, and a can of cola.

The cola will cause the mixture to foam up, so allow it to settle before stirring until all the ingredients are fully combined.

Pour the cake batter into your prepared pan.

Bake it in the oven for 30-35 minutes, or until a toothpick comes out clean.

How to make the Frosting

Meanwhile, prepare the chocolate frosting by melting ½ cup butter in a saucepan over medium-low heat. Add cola and cocoa powder and bring the mixture to a slight boil. Remove from heat and stir in powdered sugar until fully combined. The mixture will thicken when you add the powdered sugar.

What does Coca-Cola do in this cake?

Coca-Cola is a carbonated soft drink often used as an ingredient in baked goods. It can be used to replace wet ingredients in many baked goods.

Adding carbonated soda to a box of cake mix is a great way to make a boxed cake. Boxed cake mixes already have leavening agents added, but the soda replaces oil and egg.

In this recipe, I replace the oil requested in the cake mix box with soda for flavor.

Can I make this Coca-Cola Cake from scratch?

If using boxed cake mixes isn’t your thing, you can make this Chocolate Coca-Cola cake from scratch.

Can I use other sodas in this recipe?

Absolutely! Root Beer, Dr. Pepper, or other cola brands will make a great substitute for Coca-Cola in this recipe.

How long does Coca-Cola cake last?

This cake will last a room temp for about 3-5 days.

Can I use sugar-free soda?

I haven’t tested this recipe with diet or sugar-free soda, but I guess it would work. The benefit of the soda in this recipe is using a carbonated beverage. As long as it’s carbonated, the texture should be the same…it’ll just taste a little different.

I hope you enjoy this Old Fashioned cake as much as we do. If you’re looking for other dessert recipes, try these out. 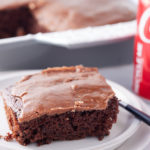 This Coca-Cola cake is a classic dessert for family gatherings and special occasions. It's a moist chocolate cake made with Coca-Cola as a key ingredient, and it's topped with a layer of deciduous chocolate frosting.
Prep Time 10 minutes
Cook Time 30 minutes
Total Time 40 minutes
Servings 15 people
Calories 323kcal