This slow cooker pumpkin soup is rich and comforting, but entirely vegan. It’s super easy to make, and full of complex flavors.

When the weather gets cold I immediately turn to soups. Is there anything more soothing than a bowl of warm, hearty soup on a chilly evening? This slow cooker pumpkin soup is one of my favorite recipes, because it’s packed with fall and winter flavors. It has a deep, rich pumpkin flavor, while fresh thyme, allspice, and coconut milk add complexity.

But the best part about this dish? It’s as simple and easy of a recipe as you’ll find. Because it’s a slow cooker soup, this dish is as straightforward as throwing a bunch of ingredients in the slow cooker, leaving it alone, and then blending. Add in the fact that it’s a fully vegan recipe, and this becomes a must-make soup when the weather turns cold.

Here are all the items that you need to make slow cooker pumpkin soup. Scroll to the recipe card at the bottom of the page to see the exact quantities for each ingredient.

Can You Use Pumpkin Puree?

Here’s how to make this easy and comforting soup recipe.

Here are a few different things that you can do to ensure that this slow cooker pumpkin soup winds up perfect every time you make it.

Want to play with this slow cooker pumpkin soup recipe? Here are a few variations you can try.

What to Serve With Slow Cooker Pumpkin Soup

This cozy soup goes really well with a side of bread, or some hearty vegetables. Here are a few of my favorite things to serve it with.

How to Store and Reheat

The soup often thickens up in the fridge, so you may need to add a little water to it before reheating.

Absolutely! You can keep this soup in an airtight container in the freezer for up to 3 months. Thaw or defrost before heating. Freezing the soup will often separate it, so you may need to blend the soup again when you reheat it. 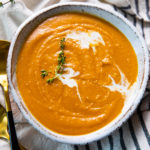 Store in an airtight container in the fridge for up to 5 days, or in the freezer for up to 3 months. Reheat on the stovetop or in a slow cooker on low heat.