This Vegan Sweet Potato Pie is just like the Southern classic, but made without the dairy and eggs. Sweet, creamy, and perfect for a celebration!

The Significance of Sweet Potatoes in Black Cooking

In many parts of West Africa, yams are a staple food. The tuber is grown in tropical environments, so enslaved Africans brought to the Americas substituted sweet potatoes, which can be cultivated in milder North American climates.

Although many people think yams and sweet potatoes are related, they’re actually different in flavour, appearance, and texture. Despite this, sweet potatoes became a just as much of a staple in Black American cooking as yams were in West Africa.

Sweet potato pie is a poignant reminder of what the slave trade took from our people, and also the uncomfortable ways it forced enslaved populations to innovate and make do with what they had.

Scroll down to the recipe card below this post for ingredient quantities and full instructions.

Here’s how to make your own plant-based sweet potato pie at home:

Pre-bake the crust. Prick the bottom of the crust with a fork, then place a piece of parchment paper onto the top of the crust and fill it with pie weights. Bake for 10 minutes, then let it cool.

Bake the sweet potatoes. Increase the oven temperature to 400°F/200°C. Pierce the sweet potatoes with a fork, rub them with oil, and bake them on a foil, parchment, or silicone lined baking sheet for 50 to 60 minutes, or until they’re tender.

Puree the potatoes. Once the potatoes are cooled, peel them and puree them in a food processor until they’re smooth.

Make the filling. Combine the puree with the remaining pie ingredients, either in a large mixing bowl or in the food processor. Stir or process until smooth, then cover with a kitchen towel and let the mixture sit for 15 to 30 minutes.

Bake. Lower the oven temperature to 350°F/180°C and pour the filling into the pie crust. Tap lightly on the counter to remove any air bubbles, then bake for 60 minutes.

Cool. Let the pie cool completely on a wire rack, then refrigerate for 4 to 6 hours, or preferably overnight.

Why Is My Sweet Potato Pie So Soft?

These simple hints and tips will help you make a perfect vegan sweet potato pie:

You can wrap your vegan sweet potato pie in the dish or transfer leftovers to an airtight container and keep it in the refrigerator for up to a week. Let it come to room temperature before serving.

Can This Recipe Be Frozen?

Wrap the sweet potato pie well or transfer it to an airtight container; it can be stored in the freezer for 2 to 3 months. Let it thaw in the refrigerator before serving. 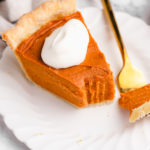 This Vegan Sweet Potato Pie is just like the Southern classic, but made without the dairy and eggs.
Prep Time 45 minutes
Cook Time 2 hours
Total Time 2 hours 45 minutes
Servings 10 servings

MAKE THE PIE CRUST AND SET ASIDE

You can wrap your vegan sweet potato pie in the dish or transfer leftovers to an airtight container and keep it in the refrigerator for up to a week. Let it come to room temperature before serving.
Click here to cancel reply.

Can this pie be frozen? If so for how long?

This can be frozen for 2 to 3 months! Wrapped carefully and fully cooled, and I would recommend thawing it in the fridge overnight to prevent the crust getting soggy.