Slow cooker ham is an easy recipe that’s perfect for the holidays or weekly Sunday dinner. Free up your oven and cook this flavorful ham in the slow cooker.

Ham is a holiday stable in kitchens around the country. Thanksgiving, Christmas, Easter…a good ham is an easy way to complete your holiday menu. This holiday season, free up your oven, sit back & let the appliance do the work.

There are only 3 ingredients in the easy recipe!

How To Make This Ham

Cooking a ham is easy, especially when you use an appliance like the slow cooker.

Ham is a cut of pork from the leg of a pig. People eat ham worldwide. It comes in many different forms: cured ham, smoked ham, fresh ham, etc. Ham in the grocery store is usually cured.

What Type Of Ham To Use

This slow cooker recipe uses a cured (cooked) ham, specifically sliced or spiral-cut. Cured ham is readily available year-round and should be easy to find at your local grocery. Since this ham is already pre-cooked, all you are doing is re-heating it with brown sugar and pineapple juice. A bone-in, spiral-cut ham is probably the most common ham served for the holidays. It’s pre-cooked pre-cut into 3/8-inch slices. Bone-in or boneless ham both work well with this recipe.

The main thing to keep in mind when picking a ham for this recipe is to choose a ham that will actually fit your slow cooker with the lid on. I used a boneless, sliced ham that was a little over 5 pounds. If you find that your ham doesn’t quite fit in your slow cooker, try cutting it up as best as possible. I understand this might not be easy if you’re using bone-in ham. Whether you use a bone-in or boneless ham is up to you.

Store leftover ham in an airtight container in the refrigerator for up to 4 days. To freeze ham, first wrap it in foil or plastic wrap. Then place the wrapped leftovers in a freezer-friendly storage bag. This will keep in the freezer for up to 3 months. Do not throw the liquid from the slow cooker out. Save it liquid along with any leftovers.

If you are going to serve the leftover ham right away, I do not suggest reheating it in the slow cooker. It will take too long & that’s not really the purpose of a slow cooker. Leftovers are best reheated in the oven, microwave, or pan.

Side Dishes For This Ham 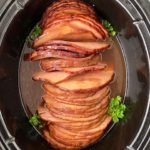 If you use a boneless ham, the cook time will be closer to 2 hours & bone-in closer to 4 hours. You’ll know it’s ready when the internal temperature reaches 140 degrees.
Click here to cancel reply.