This Black Folks Shrimp and Grits recipe is made with fluffy, creamy stone ground grits and served with Southern Creole seasoned gravy. Pair this soul food staple with any of your favorite seafood or shellfish.

Origin/ Where Did Shrimp and Grits Originate

Shrimp and grits was originally an African dish made with ground maize and shellfish. It migrated with enslaved people who were brought to the Lowcountry of the American South.

This variation of the dish originates from the South, primarily the Carolinas along with a taste of New Orleans and Louisiana. It’s sometimes referred to as breakfast grits or breakfast shrimp. It’s also often served with fried catfish or salmon croquettes as well.

Shrimp and grits have become really popular in recent years. You can find them on many brunch menus now and they are almost always prepared differently. I have encountered several versions that have a tomato-based sauce. This recipe demonstrates how to make the meal the Black way.

What Type of Grits to Use

Stone-ground grits are my favorite type to use. They have a different texture than quick grits. Stone-ground are made from whole dried corn kernels that have been coarsely ground the old-fashioned way: between the two stones of a grist mill. These often have a rich corn flavor. They are also less processed.

Stone- ground is usually harder to find at an everyday grocery store. Most are focused on instant grits. I got mine at Trader Joe’s and you can also pick up stone-ground grits from Amazon.

Quick grits are ground fine (as opposed to coarse). These will cook faster than stone ground, but not as quickly as instant. Instant grits have been pre-cooked.

If you use quick grits or instant, refer to the product packaging for instructions on how to cook those.

You may also love our Smoked Gouda and Grits recipe.

What Type of Shrimp to Use

Shrimp can be found at the grocery store in a few different ways. There is raw, pre-cooked, raw and frozen, deveined, tails on, tails off, etc.

I don’t recommend pre-cooked shrimp. There is an obvious difference in taste due to the lack of quality. The shrimp is cooked and then frozen and you have to cook it/warm it up again. This usually overcooks the shrimp. Raw shrimp only takes minutes to make.

Deveined shrimp are easier to work with. The black vein that runs along the back of the shrimp is the digestive intestinal tract. Is this shrimp poop, yes. You can buy it with the vein and remove it using a sharp paring knife to make a slit along the back and lift out the vein with the tip of the knife.

Check out tips on How to Peel and Devein Shrimp here.

As for sizing, I prefer large shrimp and 15-20 count packages.

How to Make Black Folks Shrimp and Grits

Detailed measurements and full instructions can be found in the recipe card at the bottom of this post.

The gravy sauce is one of the best parts of this recipe. You will make the gravy using broth (I like to use chicken broth), onions, garlic, bacon drippings, Creole Seasoning, and fresh lemon juice.

How to Substitute Bacon

You can substitute bacon for turkey bacon, sausage, turkey sausage, etc. The bacon is used in the recipe for additional flavor. You can also simply omit it if you wish.

If your grits are runny it’s because you used too much liquid or the grits were cooked at too high of a temperature. The type of grits you use will determine the amount of liquid you need and different brands may cook differently as well. Be sure to review the instructions on the package of grits you purchase. Take note of the liquid to grits ratio and make adjustments to this recipe if necessary.

If you find your grits are runny you can drain any excess water/broth to help with thickening.

Grits will thicken as they cool. This is where the phrase “Thick as day-old grits,” comes from lol.

Making grits shouldn’t be a rushed job. Unless you use this Instant Pot Grits method. No stirring and it’s full proof! If your grits are lumpy it’s because they weren’t whisked and stirred often enough.

How to Tell When the Shrimp Have Finished Cooking

Raw and frozen shrimp are translucent gray. When it’s cooked, it should be an opaque white with some pink and bright red accents. This is the best indicator of whether or not shrimp is fully cooked.

When shrimp cooks, the muscle contracts, so the shrimp shrinks and curls. I find that it’s perfectly cooked when it has a C shape. I remove the shrimp from heat immediately when it reaches this shape. Often, if it reaches an O shape, and completely curls in, it will taste overcooked.

If your shrimp is dry, rubbery, or mushy, you cooked it too long. Shrimp cooks fast, it’s another reason why it’s one of my favorites for quick meals. The key is to remove them from the heat right when the flesh is uniformly pink. Watch shrimp closely as it cooks, do not wander away, especially if you are cooking it in a pan and searing it on the stove.

Pair With These Side Dishes 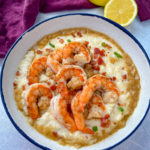