These creamy Southern Style Smoked Gouda Grits taste like brunch after Sunday service. They take about 20 minutes to prepare and have just a handful of ingredients. These are typically paired with an egg and meat like my crispy air fried bacon for breakfast, or as part of a shrimp and grits dinner.

What are grits and why do Black people eat them?

Grits are a grain made from grinding corn. They don’t taste like much on their own.

Even though grits and corn have Native American roots, grits became a staple in African American kitchens because they’re not only cheap and fulfilling, but also versatile.

For example, they can be used in place of flour, turned into porridge and elevated with meats and seafood.

Grits, among other things, are reflection of our ability to create something great even when we have just a few resources.

Recipes to Enjoy this with 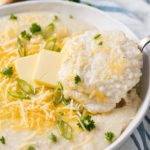 Print Pin
No ratings yet

Great recipe. Quick and easy and it tastes really good! This will be my go-to recipe for smoked Gouda grits.

I'm so happy that you enjoyed this recipe and appreciate you taking the time to write a review :)