I love Thanksgiving dressing, but I don’t like the taste of regular bread in the original dish. So, if you’re looking for a stuffing alternative without bread, this Jiffy cornbread dressing (stuffing) is the best option. It uses cornbread instead of bread and has so much flavor. It’s easy to prep and takes less than 30 minutes to bake the mixture in the oven. Learn how to make tasty cornbread dressing, plus tips for low-carb options.

How To Make Jiffy Cornbread Dressing

Stuffing and dressing are the same, except that stuffing is put inside the turkey while dressing is served separately. Check out various versions of the classic African American cornbread stuffing.

How can I enhance my Jiffy mix?

Does cornbread need to dry out for dressing?

Stale/ dry bread produces better results, but you can also use cooled freshly-baked cornbread if you are in a time crunch.

Do you put eggs in Southern cornbread dressing?

Yes. It helps to serve as a binder. 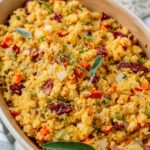 Print Pin
No ratings yet

Why not just make Cornbread from scratch? It's super easy and you don't have to ingest a highly processed food with all those chemical ingredients.

We have a recipe for that. This is for people who want something different.